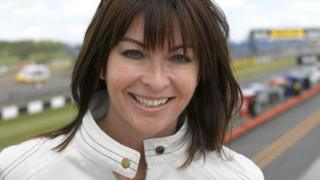 Suzi Perry will present BBC Formula 1 coverage from the start of next season.

Perry has presented other sport shows in the past, including the BBC's MotoGP coverage.

She has also presented TV programmes across travel, sport and technology - including the Gadget Show on Channel 5.

"Motorsport is my life and I've really missed being away from the grid," said Perry.

She replaces Jake Humphrey who announced in September he would be leaving to present BT Vision's Premier League footy show.

"She'll bring real energy and years of experience to one of the biggest jobs in sports broadcasting.

Her presenting ability, coupled with her love and knowledge of motorsport, make her an excellent addition."

The BBC currently shares rights with Sky Sports to show F1 on TV and extended the rights last year to show the sport on BBC1 until 2018.

All 20 races will be broadcast live on BBC Radio 5 live or 5 live sports extra, including the BBC Sport website.