Parts of the UK hit by flooding 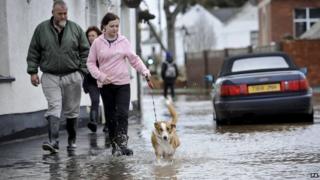 Flooding and strong winds across parts of the UK has led to travel chaos on the busiest weekend of the year.

The Environment Agency has issued around 160 flood warnings across England with parts of Wales and Scotland also flooded.

Some residents living in Cornwall, Stoke Canon, near Exeter, and Stonehaven, near Aberdeen in Scotland have had to be evacuated from their homes because of the flooding.

In Cornwall, one severe flood warning is in place, meaning there is a danger to life.

Rail companies are asking passengers not to travel in the South West of England and Wales because of delays and cancellations.

In Scotland, 29 flood warnings have been issued by the Scottish Environment Protection Agency.