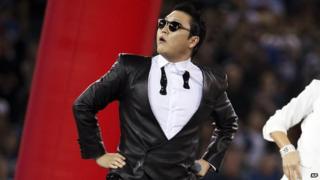 Gangnam Style has become the first ever video to get one BILLION views on YouTube!

It's inspired hundreds of copycat videos, with everyone from schools and the British army to Team GB equestrians showing off their horse dance moves.

Gangnam Style overtook Justin Bieber's Baby as the most viewed video on YouTube in November.

The video's been watched between seven and 10 million times a day, on average.

It's hit the number one spot in loads of countries around the world, including the UK.