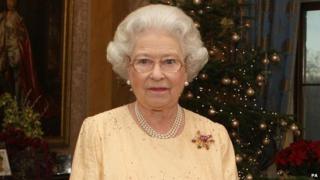 Sitting down to watch the Queen's special TV message is part of many people's Christmas Day.

This year, the annual broadcast will look a little different for a few people, as the Queen has recorded her message in 3D for the first time.

It comes 80 years after George V, the Queen's grandfather, started the festive tradition with a speech on the radio on Christmas Day.

The Queen made the first televised Christmas broadcast in 1957.

A spokesman said the Queen has watched this year's message back, and thought it "absolutely lovely".

She needed no convincing to give the new technology a go.

"The Queen agreed straight away... she was absolutely ready to embrace something new in this year," the spokesman added.

What is the Queen's Christmas Message?

The broadcast, known as 'the Christmas Day address' is written by the Queen and usually talks about the events of the past year.

No one knows yet what's in this year's message but it's thought the Queen will speak about the Diamond Jubilee and London 2012.

The Queen's Christmas address is broadcast on Christmas Day at 3.00pm on BBC One.