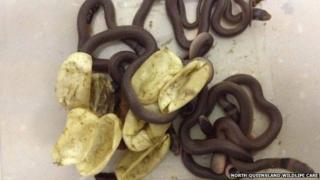 An Australian toddler has had a lucky escape after he collected eggs and hid them in a container in his wardrobe.

What three-year-old Kyle didn't realise, was that the eggs would hatch into deadly snakes!

Kyle wasn't hurt though and the snakes were later released safely into the wild.

The snakes measured just 12-15cms long. But despite being young they're still dangerous.

"Their fangs are only a few millimetres long at that age," explained Trish Prendergast of North Queensland Wildlife Care. "They probably couldn't break the skin, but they're just as venomous as full-grown snakes."

The eastern brown is the second most venomous snake in the world. The inland taipan is the world's most venomous snake, but don't worry... they tend to slither around in the savanna and dry, arid scrublands of Australia, so you won't find one on the loose in the UK anytime soon!

Read our guide to what to do if a snake bites you.