Experts say the world isn't going to end on 21 December 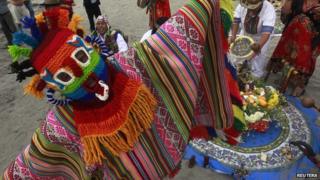 Thousands of people have gathered at ancient ruins in Central America and elsewhere because they believe the world is about to end.

It's because the date - 21 December 2012 - marks the last day of a very old calendar used by the Mayan people.

The ancient Mayans lived in what's now Mexico and parts of Central America between 250 and 900AD.

They predicted that the world would end on 21/21/2012. But experts say that isn't the case and we'll see Christmas!

Many who still follow the Mayan way of life say their ancestors got it wrong, and that the end of the calendar actually means the start of a new era - the calendar simply resets and starts again.

That hasn't stopped some believers making their way to a mountain in southern France that's thought to be a place of safety.

However, reports suggest that there are more journalists there than actual believers.

"I don't really believe that the end of the world is coming, but it is nice to be here in case something unusual happens," one of the people who'd travelled to Bugarach mountain said.

Greta and Attenborough to talk at virtual festival