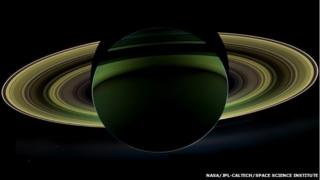 A stunning new backlit image of the planet Saturn and its rings has been released by Nasa.

The view of Saturn being lit up from behind by the Sun was taken by the Cassini spacecraft in October.

Carolyn Porco from Cassini's imaging team said: "Of all the many glorious images we have received from Saturn, none are more strikingly unusual than those taken from Saturn's shadow."

Cassini has been orbiting gas giant Saturn for more than eight years.

Saturn is the sixth planet from the Sun and has beautiful rings made of ice particles.

It's the second largest planet in the Solar System but is the least dense - it would float in water if there was a bathtub big enough to hold it!