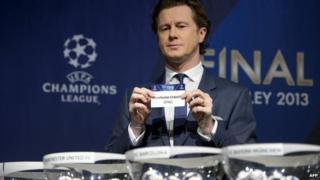 Manchester United have been drawn against nine-times winners Real Madrid in the last 16 of the Champions League.

It means Cristiano Ronaldo will be heading back to Old Trafford for the first time since his £80 million move from United to Real in June 2009.

The first legs of the ties will be played in February, with the return matches taking place in March.

Other highlights of the draw include seven-times winners AC Milan taking on Barcelona, home of super striker Lionel Messi.

The draw for the last 32 of the Europa League took place on Thursday too.