'Biggest appeal ever' for Syria 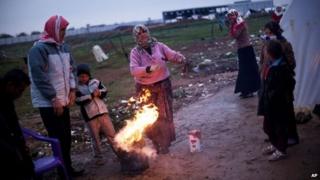 The United Nations (UN) wants to raise almost a billion pounds to help those affected by the ongoing fighting in Syria.

It's the "largest short-term humanitarian appeal ever", they say.

The UN's job is to bring different countries together to work for peace.

It's thought more than 40,000 people have been killed in Syria since the conflict began in March 2011 - and hundreds of thousands made homeless.

The fighting in the country is between President Bashar al-Assad's government and rebel forces who want him out.

Life has been very hard for people there since the fighting began.

Food, shelter and medicines are needed

The United Nations have launched their latest appeal to try and help the million people expected to have fled across Syria's borders by mid-2013.

More than 525,000 Syrians have already crossed into neighbouring countries.

UN officials said they would need to provide food, shelter, medicine and even schools for them over the next year.

They're also hoping to provide aid to a further four million people inside Syria, half of whom have been forced to leave their homes.

Watch Ricky's report about what life is like for people living in Syria.