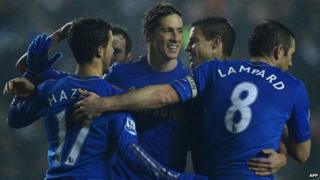 There were goals aplenty as Chelsea came from behind to thrash Leeds at Elland Road on Wednesday.

The 5-1 win puts Rafael Benitez's side through to the Capital One Cup semi-finals.

The European champions looked in big trouble as Championship side Leeds scored first in front of 35,000 passionate supporters.

Late in the first half, Luciano Becchio gave the home team a lead and hope of a famous win.

But Juan Mata fired an equaliser just after the break and Branislav Ivanovic headed the Blues into the lead.

Interim manager, Rafael Benitez was very pleased: "I thought the performance was fantastic," he said.

"You can see that in every game the team is a little bit stronger."