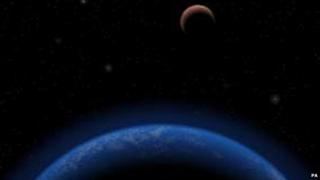 Astronomers are really excited after discovering that the nearest Sun-like star to Earth has five planets around it.

One of the planets that orbit Tau Ceti is in an area that's called the "habitable zone", where water can exist.

Scientists say that's important because you need water for life as we know it to exist.

They now hope to find even more planets further away in space.

But if you were hoping to catch a glimpse of Tau Ceti's planets through a telescope you'll be disappointed.

Astronomers could only tell they were there through measuring changes in the star's light.

Schools in Northern Ireland to close for two weeks

Has YOUR class been sent home from school?