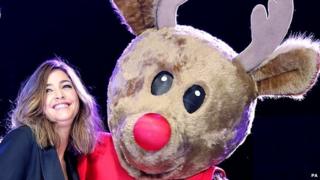 Rudolph the red-nosed reindeer had a very shiny nose - but have you ever wondered why it's that colour?

Scientists in Norway and Netherlands have studied human noses compared to reindeer.

They found that reindeer noses are more tightly-packed with lots of blood vessels - which could explain why Rudolph's nose was red!

It won't explain how he can fly a sleigh across the sky though, so some mysteries remain.

In a not-entirely-serious study, released on Monday in the British Medical Journal, the scientists compared the noses of two reindeer with those of five healthy people, and one person with a harmless growth on their nose.

They found that the extra blood vessels in the nose would have carried more oxygen-rich blood cells - which give blood its bright red colour.

Here's their report's conclusion: "Rudolph's nose is red because it is richly supplied with red blood cells, comprises a highly dense microcirculation, and is anatomically and physiologically adapted for reindeer to carry out their flying duties for Santa Claus."