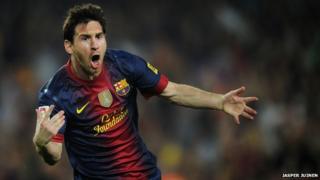 Lionel Messi has signed a new deal with Barcelona that will keep him at the Nou Camp until 2018.

Messi's current deal ran until 2016 but the Catalan giants want to keep hold of their goal-scoring maestro.

Argentina's biggest star is enjoying a fine run of form.

A Messi fact for you

Lionel Messi signed for Barcelona as a 13-year-old. He made his debut against RCD Espanyol on 16 October 2004.

He scored his 90th goal of the year last weekend, having already broken the 40-year-old record held by Gerd Mueller, who scored 85 goals in one calendar year.

The midfield magician has scored two goals in each of the last eight games that he's started for Barca.

Xavi and Carles Puyol have also had both their contracts extended by the La Liga champions, until 2016.