2012 'worst year ever' for illegal ivory trade in Africa

Elephant conservationists have announced that a total of 34 tons of ivory has been seized in 2012.

It is the highest total of ivory confiscated in a single year since records began, making it the worst year in the fight against elephant poaching.

According to wildlife experts, the number of elephants killed per day stands at between four and five. 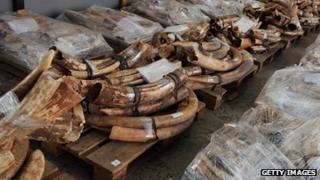 Demand for ivory is so great that conservationists fear African elephants could soon be driven to extinction.

"It is an indication of an illegal industry completely out of control - in 2011, we thought the threats to elephants could not get any worse."

Most illegal ivory is destined for Asia where it is very popular.

Last month, five tons of ivory was found in Hong Kong, on ships from Kenya and Tanzania - but authorities aren't sure which wildlife reserves they came from.

Earlier this year, at least half of the elephants in Cameroon's Bouba Ndjida National Park were slaughtered for their ivory by poachers on horseback.