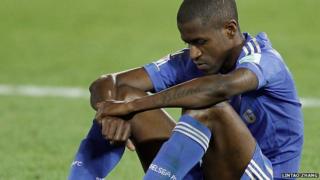 Chelsea's bid to win the Club World Cup ended in disappointment on Sunday.

Paolo Guerrero's 69th-minute header was the difference as the Blues lost 1-0 to Brazilian side Corinthians.

Under pressure to win the trophy after their early exit from the Champions League, Rafa Benitez's side wasted several chances to score.

Fernando Torres had a stoppage-time header ruled out for offside, and defender Gary Cahill was also sent off.

Only one English team has won the Club World Cup. Manchester United beat Colombian side LDU Quito 1-0 in the 2008 final.

Chelsea coach Benitez insisted that was no excuse: "They had one chance and scored," said Benitez.

Chelsea return home thirteen points behind Premier League leaders Manchester United and need to get their season back on track in their League Cup quarter-final against Leeds United on Wednesday.