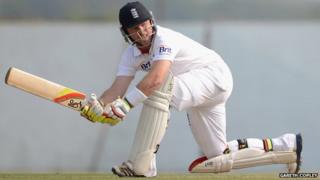 England have sealed a historic win after drawing the final game of their four-match Test series in India.

Ian Bell and Jonathan Trott both hit centuries to earn the draw England needed to win the series.

It's the first time England have won a Test series in India since 1985.

Former England captain Michael Vaughan described winning a Test series in India as "the hardest thing to do in cricket".

WHAT IS A CENTURY?

In cricket a century is a score of 100 or more runs by a batsman in one single part of a cricket match, called an innings.

At the close of play, England were 356 runs ahead of India, who didn't have time to bat again.

That meant this match was a draw, and the series finished 2-1 to England.

England travel to New Zealand next for a three-Test series in March, before taking on rivals Australia back here next summer in the 2013 Ashes.