New species of slow loris found in jungles of Borneo 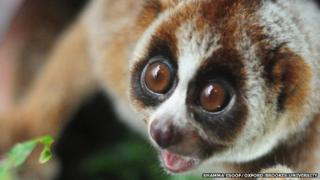 A new species of primate has been discovered in the jungles of Borneo.

It's a type of slow loris, which is related to lemurs and bush babies.

Although cute, these little guys have a toxic bite.

Scientists had to look hard to spot the differences between the new sub-species.

They think this new discovery has gone unnoticed for so long because the loris only comes out at night.

They focused on the primates' facial markings for clues - and noticed tiny differences in the dark patches around their eyes and the patterns on their heads.

Four other types of slow loris are known to exist across southeast Asia.