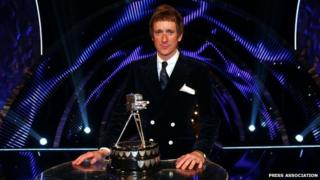 Bradley Wiggins has been voted the 2012 BBC Sports Personality of the Year.

There were more than 1.6 million votes - Olympic heptathlon champion Jessica Ennis was runner-up and Olympic and US Open winner Andy Murray was third.

It was a seriously tough contest this year. Almost all of the nominees were Olympians and Paralympians.

Team GB and Paralympics GB were also were named Team of the Year.

After receiving the award, Wiggins - famous for his super sideburns - thanked all the fans who voted, adding: