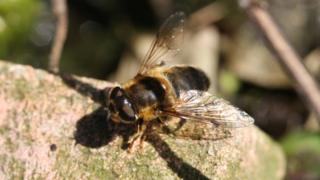 Scientists say that products used to protect crops could be part of the reason bee numbers are falling.

The findings of a study were shown to a government group that monitors the impact of policies on the countryside.

Pesticides are poisons designed to kill insects. They are widely used at levels that are not meant to hurt animals but the study says they can build up in the soil.

It's claimed bees could be affected by pesticides in high doses but chemical companies say the study was too small to prove a link.

Dr Julian Little, the spokesman for Bayer Crop Science in the UK, said "There is always the possibility of a link" but added "that is why we [make] sure that bees do not come into contact with these products in a level that would cause any problems."

Bee numbers have been dropping since the 1990s but there are lots of ideas about why, including:

Disease: Mites living on the insects have been found to spread a disease called deformed wing virus which is very harmful to bees.

GM crops: genetically modified crops are thought to be part of the reason there are fewer bees.

Climate change: some people think that changing weather has had an impact on the bees.

Bees are really important because they help pollinate crops and fruit trees and they make honey.