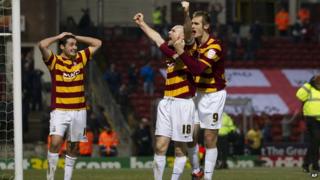 Bradford City pulled off a big League Cup shock on Tuesday with a penalty shoot-out win over top team Arsenal.

In front of a very happy home crowd, the League Two side knocked Arsene Wenger's team out of the Capital One Cup and booked themselves a place in the tournament's semi-finals.

Bradford beat Arsenal 3-2 on spot-kicks after the match finished in a 1-1 draw.

Gunners captain Thomas Vermaelen missed the crucial penalty on a difficult night for the Premier League side.

It's another setback in a disappointing season so far for Arsenal manager Arsene Wenger and his club, who last won a major title in 2005.

Bradford City manager Phil Parkinson said: "This result means everything to us, that's the players, management and staff."

"We want to try and put Bradford back on the map for the right things, and nights like tonight will certainly help do that."