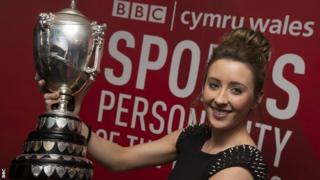 Taekwondo star Jade Jones has been named as the BBC Cymru Wales Sports Personality of the Year 2012.

The 19-year-old from Flint in north Wales won the most votes from the public, with rugby player Dan Lydiate in second place and cyclist Geraint Thomas third.

Jade was introduced to taekwondo by her grandfather when she was eight.

She battled through to win the women's -57kg title at London 2012 beating China's Yuzhuo Hou 6-4.

The Welsh Sports Personality of the Year 2012 ceremony was held at the Millennium Stadium in Cardiff on Monday evening and celebrated the past year in Welsh sport. 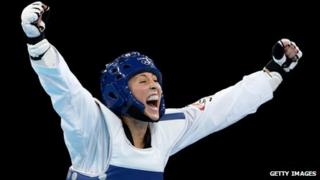 Jade was up against loads of Welsh sport stars for the award, including footballer Gareth Bale.

Last month, Jade spoke to Newsround, telling us she wants to build on her Olympic success and become 'a legend'.

She's already preparing for the next Olympics in Rio de Janeiro in 2016, where she hopes to win two gold medals.