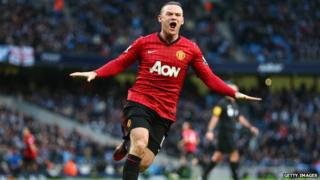 United got off to a great start with 2 goals from Wayne Rooney, but goals from Ya Ya Toure and Pablo Zabaleta pulled City level.

A last minute free kick from Robin Van Persie curled its way in to win the game for Sir Alex Ferguson's men.

Manchester United are now six points clear at the top of the Premier League.

It was a disappointing afternoon for City who haven't been beaten at Etihad Stadium since facing Everton on 20 December 2010.

"It was such a good game - a special one," said United manager Ferguson.

"It was engrossing. It tells you about the quality of the Premier League, it's such a great league."