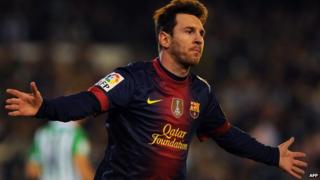 Barcelona's Lionel Messi has set a new record for the most goals scored in a year by netting his 86th goal of 2012.

He still has two league matches and one King's Cup tie before the end of the year so could add more goals to his record.