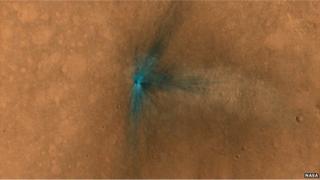 Nasa's Curiosity rover has snapped some amazing craters on the Red Planet - but here's one it made itself!

To get the rover to Mars safely, it was carried on an entry vehicle which separated from Curiosity just above the planet's atmosphere.

The images show recent impacts on the surface of Mars which Nasa thinks were made by parts of the entry vehicle. 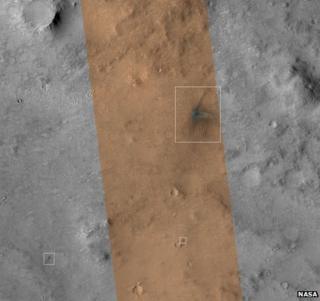 As well as the big impact, there are some smaller ones too which could be from parts of the entry vehicle

The snaps were taken by a Nasa satellite above the planet called the Mars Reconnaissance Orbiter.

Nasa's scientists hope to study the impact sites and learn more about the surface of Mars and the planet's atmosphere.