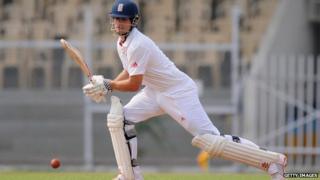 Alastair Cook has set a record for England Test centuries with his 23rd hundred.

Cook, who kicked off his career with a hundred against India in 2006, has now scored centuries in all five of his Tests as captain.

WHAT IS A CENTURY?

In cricket a century is a score of 100 or more runs by a batsman in one single part of a cricket match, called an innings.

Celebrating the record, Cook looked to the sky and punched the air.

It happened on the second day of England's third Test against India.

The four match series is currently tied at one all.