Celtic through to Champions League last 16 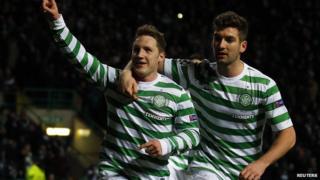 Celtic have made it through to the last 16 of the Champions League for only the third time.

"No-one gave us a prayer going into this group, but we have qualified and deservedly so," the proud manager said.

Celtic were drawn in a group alongside top teams Benfica and Barcelona, and a Spartak Moscow side that has spent more than £35m on their squad.

Celtic could face Manchester United in the next round, who qualified despite losing their final match.