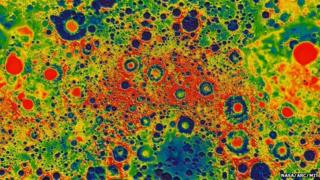 Scientists know more about the early history of the Moon, thanks to new data from two Nasa satellites.

The Ebb and Flow satellites - known together as the Grail mission - have mapped the slight differences in gravity across the Moon's surface.

The results show the Moon's received a much bigger battering from space rocks than was previously thought.

Scientists say the data can help them study Earth's ancient past too.

Prof Maria Zuber, Grail's chief investigator said: "If you look at how highly cratered the Moon is - the Earth used to look like that; parts of Mars still do look like that."

Like the Moon, Earth would have been hit over and over again in the first billion years of its existence by the left-over stuff from when the planets were made.

All this would have been happening as the first signs of life started on Earth, showing how tough the first microorganisms had to be to survive.