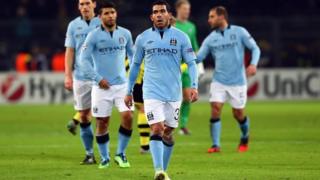 Manchester City crashed out of European football last night with just 3 points - the lowest ever total for a Premier League side in the group stages of the Champions League.

City were already out of the competition before the 1-0 defeat to Borussia Dortmund, but a win would have got them a spot in the lesser Europa League.

It's the second year in a row that the club has failed to reach the knockout stages of the Champions League.

Last season they finished third in their group with 10 points.

Elsewhere in Europe, Arsenal qualified second in their group, booking their place in the knockout stages despite losing to Olympiakos in Greece.

The Gunners led after 38 minutes from a goal by Tomas Rosicky, but two goals for the Greek side saw the North Londoners slip to second and they could face a tricky draw in the next round.

In tonight's footy action, defending Champions, Chelsea and Scottish side, Celtic, face a battle to qualify for the next round after disappointing results two weeks ago.

Chelsea host Nordsjaelland at Stamford Bridge, while Celtic play Spartak Moscow. Both teams need other results to go their way if they have any chance of reaching the last 16.

Manchester United have already secured the top spot in Group H and will host Cluj at Old Trafford.

Which games should you look out for in 2022?