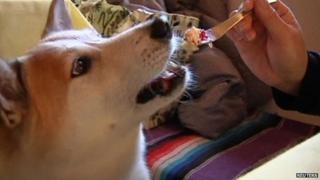 A cake for dogs has been invented in Japan for people who want to treat their pooches to something special at Christmas.

It's not made of meat though, owners can share the sponge and cream cake with their dog.

The cake does not have any chocolate or alcohol in it because those ingredients are dangerous for dogs.

Naohiko Nagatani, the chef behind the idea, first came up with it six years ago and says it has really caught on.

He already has 70 Christmas orders for the doggy dessert.

Nagatani explained why he thinks it's popular:

"The birth rate's declining here in Japan, so dogs have pretty much become like children and people want to share Christmas with them."

He said: "If it's just the humans eating cake, the dogs put on a really sad face. They want to have some themselves and get upset if you don't give them cake too."