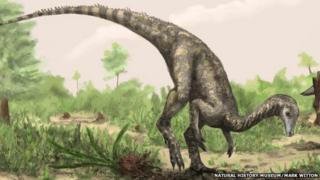 Dinosaur scientists have found what they think is the oldest known dinosaur.

It's called Nyasasaurus Parringtoni and is about 12 million years older than what we thought was the earliest dinosaur.

It walked on two legs, was up to three metres long and could have weighed 60kg - the same as many people weigh!

The find suggests millions of years passed between the first dinosaurs and them becoming dominant on land.

The scientists can't say if it's the earliest dinosaur ever because its fossil skeleton was incomplete.