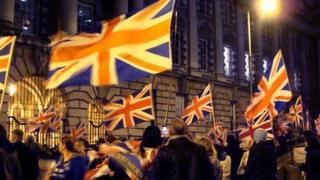 The fighting started after a vote to change how often the union flag is displayed there.

Nationalists wanted the flag to be taken down completely but agreed for it to be flown on special occasions.

This caused anger from Loyalists who wanted the flag to be flown all year round.

Today, for the first time in 106 years, the union flag is not flying above the City Hall.

The flag represents Northern Ireland being part of the UK, something not everyone living there is happy about.

For more info on the situation, check out our guide to Northern Ireland