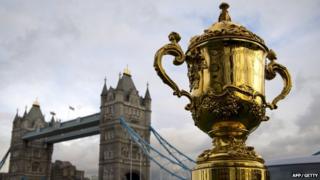 England and Wales have been drawn together for the group stage of the 2015 Rugby World Cup.

Not only will they have to play each other, but they'll also face two-time world champs Australia in Group A.

Four groups of five teams have been drawn for the group stages.

The top two in each group will make the quarter-finals

The 2015 Rugby World Cup will be the eighth edition of the tournament.

With two teams in each group still to qualify, the draw looks like this:

England fought off competition from South Africa and Italy to host the tournament for the second time.

The New Zealand All Blacks are the current champions after winning on home soil in 2011.

England are the only team from the northern hemisphere to have won the cup.

In 2003, Jonny Wilkinson's famous drop goal gave them a 20-17 win over Australia in Sydney.