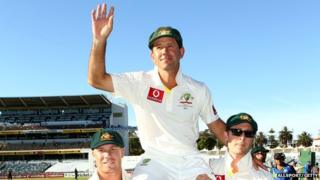 Australian cricket legend Ricky Ponting has retired from the game after losing his final match to South Africa.

The 37-year-old made just eight runs before being caught at slip in his last innings.

South Africa won the match by 309 runs to clinch the three-game series 1-0.

"It's not the way I wanted to finish," said Ponting, playing his 168th Test.

He retires as the second highest run-scorer in Test history, scoring more than 13,000 runs.