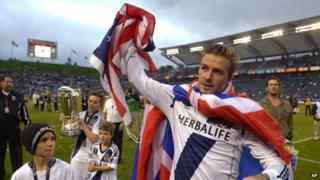 David Beckham ended five and a half years at LA Galaxy by winning the MLS Cup in his final game.

Beckham's team came from a goal down to beat Houston Dynamo 3-1.

It is the second time he has lifted the MLS Cup - LA Galaxy beat Houston 1-0 in last year's final.

It was the Hollywood ending for Beckham, who left the pitch to a standing ovation. "I am sad that this is the end," he said.

"This is a very special place for me and it will continue to be."

Beckham has been linked with moves to French teams Paris St Germain and A.S. Monaco, but insisted that he had "no idea" where he would be playing next.