Dolphins being replaced by robots in US military 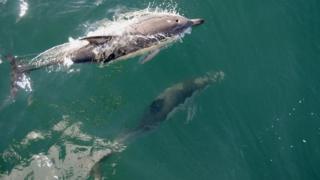 Special mine-hunting dolphins used by the American military will be replaced by robots in 2017.

The animals are trained to find and mark underwater bombs so they can be removed.

Eighty dolphins have been trained to do this and were used in Iraq last year.

Now a new robot called the Kingfish has been designed to do that job instead.

The dolphins will be retrained to do other jobs.