Union J not in X Factor final after being voted off 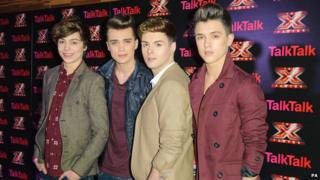 Union J failed in their bid to get through to the X factor final but mentor Louis Walsh says they are the "next big boy band".

Jamie, Josh and Jaymi auditioned for the competition as a band called Triple J before George was added to the band at the boot camp stage.

They sang two songs in their bid to stay on the show but were voted off.

James Arthur, Christopher Maloney and Jahmene Douglas are through to compete in the final next weekend.