Bendy phones could be available by 2013 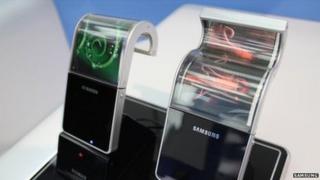 Imagine being able to roll up your mobile, squish it into your backpack - even step on it without any damage!

Well, that could soon be a reality as researchers are working on making flexible phones using the latest in stretchy plastic and electronics.

There have already been test models, attracting big crowds at gadget shows.

Now reports are saying the launch of the first bendy phone could happen as soon as 2013.

Many companies are working on the technology - LG, Philips, Sharp, Sony and Nokia among them - although reports suggest Samsung will be the first to deliver.

A spokesperson for the company said the phone's screen would be "foldable, rollable, wearable and more".