Ice sheets covering Greenland and Antarctica are melting three times faster today than they were in the 1990s.

That's according to a big study of satellite data. 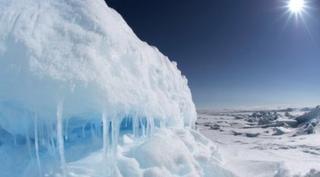 Scientists say the amount of ice lost is enough to raise world sea levels by almost one millimetre a year.

It means that melting ice has caused sea levels to rise by 11.1 millimetres since 1992 - about a fifth of the total rise.

More than 20 polar research teams worked together to look at the state of the ice in Greenland and Antarctica.

Until now it's been very difficult to measure ice sheets, but experts say the new research could help predict rising sea levels in the future.

Dr Hamish Pritchard of the British Antarctic Survey, said: "The next big challenge - now that we've got quite a good understanding of what's happened over the last 20 years - is to predict what will happen over the next century.

"And that is going to be a tough challenge."