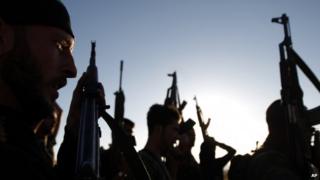 Syrian rebel fighters have been accused of using children as young as 14 in the war there.

The boys claimed they had carried weapons and acted as lookouts.

One 16-year-old even said he'd been given military training and taken part in an attack.

Majid (not his real name) said: "I used to carry a Kalashnikov [rifle]... I used to shoot checkpoints... to capture [them] and take the weapons.

"They taught us how to shoot, how to dismantle and put together a weapon, how to target."

Human Rights Watch has called on the rebel fighters to commit to not using anyone under 18, even if they volunteer themselves.