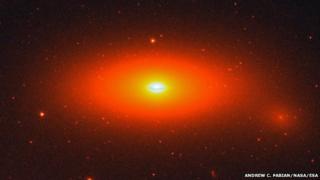 Astronomers have spotted a huge black hole - the second-biggest ever discovered - that's 17 billion times as massive as our Sun.

The surprise find has baffled scientists though, because it sits in a really tiny galaxy.

The galaxy NGC 1277 is just a quarter the size of our own Milky Way, but has a black hole 4,000 times larger than the one at the centre of our galaxy.

Until now it was thought that black holes grow with their galaxy.

Getting to grips with just how large black holes are is a tricky business.

They swallow the light around them so cannot be seen.

Instead, astronomers measure the black holes' "sphere of influence" - the gravitational pull they have on surrounding gas and stars.

One of the people who made the discovery, Remco van den Bosch said: "This galaxy seems to be very old, so somehow this black hole grew very quickly a long time ago."

"Since then the galaxy has been sitting there not forming any new stars or anything else."

"We're trying to figure out how this happens, and we don't have an answer for that yet. But that's why it's cool."