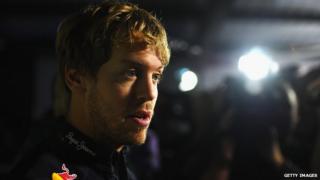 Rival team Ferrari wrote to the FIA about whether Vettel broke the rules, which could've seen him lose his title.

But the FIA has now said it thinks Vettel did not commit any offence.

If the FIA had decided differently, Vettel could have got a penalty, which would have seen him lose his world title to Fernando Alonso from Ferrari.

The Red Bull driver won his third championship title in a row with 281 points, three points ahead of Alonso.