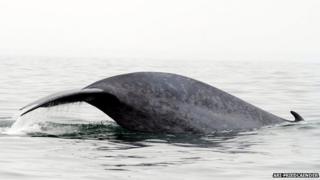 Scientists in America have discovered that blue whales perform underwater acrobatics to hunt.

The ocean giants feed entirely on krill - tiny crustaceans that live in all the world's oceans.

The results revealed that despite their relatively small tail, the whales were making impressive spins below the waves in order to catch their prey.

Blue whales can gulp down a massive 100 tonnes of krill-filled water in just 10 seconds.

"As the blue whale approaches the krill patch, the whale uses its flippers and flukes to spin 180 degrees so that the body and jaws are just beneath the krill patch," explained Dr Goldbogen - one of the scientists involved in the study.

"At about 180 degrees, the mouth just begins to open so that the blue whale can engulf the krill patch from below."

Despite their microscopic size, krill are surprisingly quick to escape the mouths of the world's largest mammal.

It's believed the whales have come up with this tactic to make their hunt more effective.

Scientists suggest this extra effort of twisting and turning rewards the massive mammals with enormous meals.