Chat: Do you ever get spam texts? 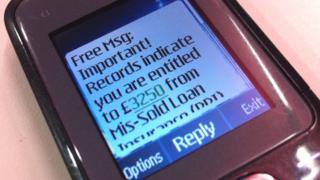 Two men have received a record UK fine for sending out spam texts.

They've got to pay £400,000 for illegally getting people's personal details to send messages encouraging them to claim for accidents and wrongly sold insurance.

Spam texts are unwanted messages that are usually trying to sell you something.

They then send hundreds or thousands of texts, in the hope that some people will reply.

If someone does respond, then the company will know the number is being used - and so then they can sell on these details.

We wanted to know whether you or your friends ever get spam text messages on your mobile phones.

Do you find them annoying? What do you do about them?

This chat is now closed but a selection of your comments is below.

"I get spam too! It's really annoying! How do they even get your number?"

"I always get spam messages trying to get me to claim for mis-sold PPI. It's really annoying; I never click on it though, internet safety right there!"

"We hate spam! We don't want what they're selling, it's all a con. What gives them the right to text and email us? Advertise it, if we want to claim then we'll call you!"

Freya and Leyla, Isle of Wight

"I get spam all the time, it wastes your time and is really annoying. They go on about PPI but I don't have it. I had an email saying that if you pay £50 and say your bank details you get £25,000 in your bank!"

"I don't get spam but I know some people that do, they say it's really annoying. MAKE IT STOP!"

"A few days ago I got a spam text and I opened it and it was a virus. Spam texts are annoying."

"I hate spam messages, it even takes my credit!"

"I do get really annoying spam texts and I HATE them! They are so aggravating!"

"I hate spam, it wastes your time. I just delete it but I wish they wouldn't do it."

"I don't get spam texts but I sometimes get spam calls. If the number is unknown I just hang up straight away."

"I have had some just recently about PPI but I just deleted them. I don't normally get them but when I do I find it quite annoying!"

"I haven't got a phone but I do get a lot of spam emails. It is ANNOYING and it has to STOP!"

"I am constantly receiving messages saying I can claim for PPI and so do my friends. I find it so annoying because I didn't sign up for any PPI and have never been in an accident. So I click delete!"

"I sometimes get spam texts but I usually block the number to stop this from happening."

"I get at least one every day saying I've had an accident or can claim for PPI. Considering I've never had an accident to claim for or taken out PPI, it's a little annoying! I haven't done anything other than delete them as soon as they're received. What else can be done?!"

"I get loads of spam texts, 99% of them are for PPI and I absolutely hate it."

"I always get them from phone companies, so annoying! I delete them - who cares if I will get 75% off on something I don't even need?"

"It's annoying having your inbox full of spam texts and having to delete them. The government should stop the spammers!"

"I always get spam texts! I find it REALLY annoying because they always tell you fake information. I just delete them straight away!"

"I get spam texts all the time, and it drives me mad! My parents say just to delete them because if you reply or pass them on, you end up getting more spam."

"I get an awful load. I get mostly email, it's horribly annoying and NEEDS to stop. It's always the same thing they are trying to sell day after day. I have decided not to even read them anymore and send them straight to junk. I get over 100 a week!"

"I always get spam. It's really annoying because some texts about banking confuse me!"

"Last week, everyone got a text saying to pass the text along to help victims - but then the teachers told us not to, it was a fake charity organisation and that it was just to get phone numbers. Everyone who passed it along got a load of boring spam messages, like HEY, YOU WANT A FOOT MASSAGE FOR FREE???"