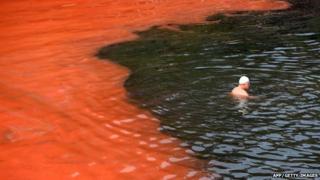 The scene at Clovelly Beach

Australia's world famous Bondi Beach had to be closed after the sea turned a tomato soup colour!

The unusual sight was caused by giant floating fields of red algae, identified as Noctiluca scintillans. 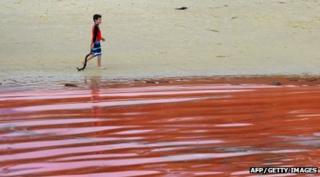 A boy stays out of the water at Clovelly Beach

It's not believed to be toxic but it can cause skin irritations among some people.

Two other spots in Sydney - Clovelly Beach and Gordon's Bay - were also shut for a while.

Algae is the general term given to a diverse group of mostly plant-like creatures that can use sunlight to make food.