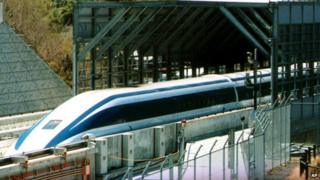 A maglev train in Japan

Super fast 'floating' trains that can go at speeds up to 310mph are being planned by a Japanese rail company.

'Maglev' (short for magnetically levitated) trains don't have wheels - they use magnetic power to lift them and propel them along the tracks.

The trains are due to be tested from next year, but won't start taking passengers until the year 2027.

It's due to link Japan's capital Tokyo with the city of Nagoya - and cut the time for the 200-mile journey by half, to around 40 minutes.

The world record speed for a maglev train is actually 361mph. That was achieved in December 2003 on a test line in Japan.