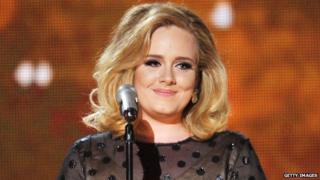 It's finally happened after nearly two years - Adele's 21 album has dropped out of the UK Top 40 for the first time.

The Brit and Grammy award-winning album has been in the Top 40 ever since it was released on 24 January last year.

But Adele can take comfort in the fact it's the fifth biggest-selling album ever in the UK, having sold 4.5 million copies.

Get this - one in five British households owns a copy of 21!