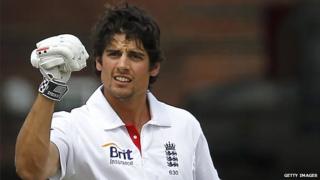 England's cricketers pulled off a magnificent win in the second Test in Mumbai, beating India by ten wickets to level the series 1-1.

They won with a day and a half to spare, after Monty Panesar polished off India's batsmen, leaving England needing just 57 runs to win.

Alistair Cook and Nick Compton knocked off the runs with little trouble.

Man of the match Kevin Pietersen played a fantastic innings of 186 on Sunday to set up the win.

It leaves the series finely poised, with two more matches still to play.

Panesar was unlucky not to be given the man of the match award, after taking 11 wickets in the match - his best performance for England.

England's other spin bowler Graeme Swann picked up eight wickets himself - meaning the two spinners took all but one of India's wickets in the match.