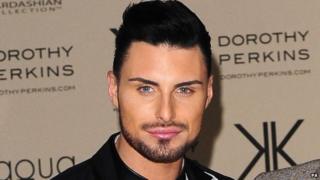 He's made his mark with his colourful costumes, over-the-top reactions, and love of spray tan - but Rylan Clark's time on The X Factor is finally up.

The Essex boy lost out to boyband Union J in the Sunday night sing-off.

His mentor Nicole Scherzinger backed him to stay, but the other three judges decided to send him home.

Rylan has been in the bottom two twice before. He said: "I have had seven bonus weeks in this."

Jahmene Douglas, James Arthur, Christopher Maloney and Union J will battle it out in next weekend's semi-final.