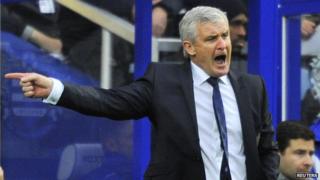 QPR have sacked manager Mark Hughes after just 10 months in charge of the club.

A statement from the club said they had little choice but to make the change after the team found themselves at the bottom of the Premier League and without a win this season.

Mark Bowen and Eddie Niedzwiecki will take charge for the away match against Manchester United on Saturday.

Former Tottenham boss Harry Redknapp has been named as one of the top contenders to take over as manager.