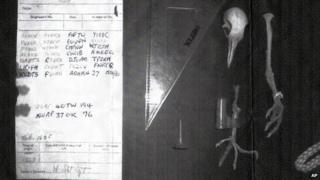 Britain's top code-breakers say they are stumped by a secret code found on the leg of a dead pigeon.

The bones of the spy bird were found in a chimney in Surrey with a message from World War II attached.

Experts have been trying to figure out the code ever since they were given the message a few weeks ago - but haven't been able to understand it.

They're now asking members of the public to help them to try and crack the code.

Around 250,000 pigeons were used during World War II to carry messages.

Agents used lots of different codes to sent secret information to each other during the war.